Our CNS pipeline includes three differentiated new generation CNS drug candidates with potential to go beyond the current standard of care for anxiety, depression and other CNS disorders. Each of our drug candidates, PH94B, PH10 and AV-101, has a differentiated potential mechanism of action, has been well-tolerated in all clinical studies to date and has therapeutic potential in multiple CNS markets. 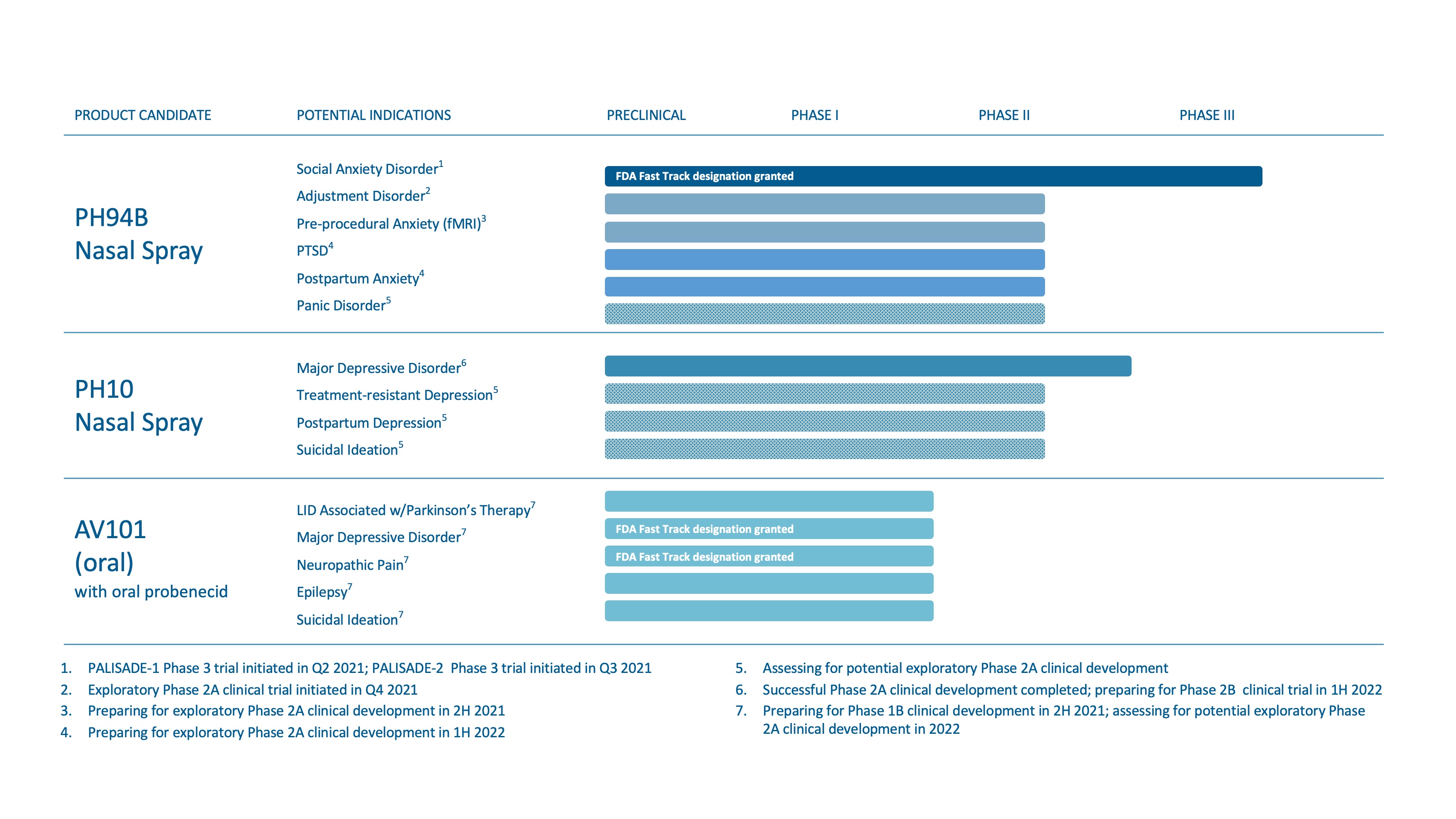 PH94B is a first-in-class, odorless, rapid-onset (approximately 15 minutes) pherine nasal spray with the potential to be the first FDA-approved, fast-acting, on-demand acute treatment for millions of Americans who suffer from Social Anxiety Disorder (SAD), with additional therapeutic potential in Adjustment Disorder with Anxiety (AjDA), Postpartum Anxiety, Procedural Anxiety, Post-traumatic Stress Disorder (PTSD), Panic Disorder and Generalized Anxiety Disorder (GAD). Designed to be administered intranasally at microgram doses, the proposed mechanism of action (MOA) of PH94B is fundamentally differentiated from that of all current anti-anxiety medications, including benzodiazepines. PH94B’s proposed MOA does not involve either direct activation of GABA-A receptors or binding to neuronal receptors in the CNS. Rather, PH94B’s proposed MOA involves binding to chemosensory receptors from neurons in the nasal passages, thereby limiting transport of molecules to the circulatory system and minimizing potential systemic exposure, suggesting that PH94B has the potential to achieve rapid-onset anti-anxiety effects without requiring systemic uptake or causing benzodiazepine-like side effects and safety concerns.

Following a statistically significant Phase 2 public speaking (p=0.002) and social interaction (p=0.009) study of PH94B in adults with SAD, and a successful meeting with the U.S. Food and Drug Administration (FDA), we are currently conducting PALISADE-1 and PALISADE-2, each a Phase 3 trial to evaluate the efficacy and safety of PH94B for the acute treatment of anxiety in adults with SAD. In addition, our exploratory Phase 2A clinical program for PH94B in additional anxiety disorders is now underway with the recent initiation of a Phase 2A clinical trial in AjDA.

The FDA has granted Fast Track designation for development of PH94B for acute treatment of SAD, believed to be the first such designation ever granted by the FDA for a SAD drug candidate. In an acute treatment manner analogous to use of a rescue inhaler before a predictable asthma attack or a migraine drug before onset of a migraine episode, PH94B has potential to be used as needed by a person with SAD before an anxiety-provoking stressor.

Based on the results of Phase 2 studies, PH94B has the potential to be the first FDA-approved acute treatment of anxiety for millions who suffer from SAD worldwide. In addition, PH94B has therapeutic potential in multiple additional anxiety disorders, including, among others, adjustment disorder, postpartum anxiety, preoperative anxiety, PTSD, and panic disorder.

PH10 is an investigational CNS pherine nasal spray with potential to be a fast-acting stand-alone treatment for neuropsychiatric indications involving depression. Developed from proprietary compounds called pherines and administered at microgram level doses as an odorless nasal spray, PH10 activates nasal chemosensory cells in the nasal passages, connected to neural circuits in the brain that produce antidepressant effects. Specifically, PH10 engages peripheral chemosensory receptors in the nasal passages that trigger a subset of neurons in the main OB that stimulate neurons in the limbic amygdala. This is turn increases activity of the limbic-hypothalamic sympathetic nervous system and increases the release of catecholamines. PH10 was designed to not require systemic uptake and distribution to produce its rapid-onset antidepressant effects. In a small randomized, double-blind, placebo-controlled exploratory Phase 2A clinical study in major depressive disorder (MDD), at a 6.4 mcg dose, rapid-onset antidepressant effects were observed and sustained for 8 weeks (p=0.022), without psychological side effects or safety concerns associated with ketamine-based therapy. With its rapid-onset pharmacology, lack of systemic exposure at clinical doses administered to-date and favorable safety results observed in all clinical studies to date, we believe PH10 has potential to be a new stand-alone treatment for several depression disorders.

AV-101 (4-Cl-KYN) is an investigational prodrug designed to be orally administered and to target the N-methyl-D-aspartate receptor (NMDAR), an ionotropic glutamate receptor in the brain. Abnormal NMDAR function is associated with numerous CNS diseases and disorders. AV-101’s active metabolite, 7-chloro-kynurenic acid (7-Cl-KYNA), has been observed to be a potent and selective full antagonist of the glycine co-agonist site of the NMDAR that inhibits the function of the NMDAR, but does not block NMDAR function like ketamine and other NMDAR antagonists. AV-101 has been observed in clinical trials to be orally bioavailable, well-tolerated and not cause dissociative or hallucinogenic psychological side effects or safety concerns similar to those that may be caused by other NMDAR antagonists. In light of these and findings from a wide range of preclinical studies, we believe that AV-101, in combination with FDA-approved probenecid, has potential to become a new oral treatment alternative for multiple large CNS markets.