Poster presented at 2019 Annual Meeting of American College of Neuropsychopharmacology

In the Phase 1b target engagement study, 10 healthy volunteer Veterans from Operation Enduring Freedom, Operation Iraqi Freedom or Operation New Dawn received single doses of AV-101 (720 mg and 1440 mg) and placebo, in a double-blind, randomized, cross-over controlled trial. The primary goal of the study was to identify and define a dose-response relationship between AV-101 and multiple electrophysiological (EEG) biomarkers related to NMDAR function, as well as blood biomarkers associated with suicidality. The findings suggest that, in healthy Veterans, the higher dose of AV-101 (1440 mg) was associated with dose-related increase in the 40 Hz Auditory Steady State Response (ASSR), a robust measure of the integrity of inhibitory interneuron synchronization.

Dr. Marijn Lijffijt, assistant professor of psychiatry research at Baylor and the Michael E. DeBakey VA Medical Center (MEDVAMC) in Houston served as Principal Investigator of the study. VistaGen and the U.S. Department of Veterans Affairs (VA) entered into a Material Transfer Cooperative Research and Development Agreement (MT CRADA) regarding clinical trial material for this study, and VA funding was provided for all other study costs.

"According to the VA, over 20 veterans take their lives each day – a number that is alarming and unfortunate," said Mark A. Smith, M.D, Ph.D., VistaGen's Chief Medical Officer. "Nearly every day we hear stories in the news about how the suicide rate is increasing, and how it's even higher among U.S. Veterans than non-Veterans. Better therapies are needed for Veterans who are suffering from suicidal ideation. We interpret the findings of this biomarker study to mean that the high dose of AV-101 was sufficient to reduce NMDA function. Based on our recent preclinical studies demonstrating the ability of the transport inhibitor probenecid to markedly increase concentrations of AV-101 (approximately 7-fold) and its active metabolite 7-chloro-kynurenic acid (approximately 35-fold) in the rodent brain, it may be possible to increase and prolong NMDA antagonism even further when AV-101 and probenecid are combined. These human target engagement findings represent our first-step collaboration with Baylor and the VA, and they increase our confidence in AV-101's safety and its potential, especially with adjunctive probenecid, to treat this major health concern. We look forward to future discussions with Baylor and the VA regarding a second-step program involving Veterans who are battling suicidal ideation."

"Overall, this study is a promising start on the path to explore AV-101's potential to address the morbidity and mortality associated with suicidal depression," said Sanjay J. Mathew, M.D., vice chair for research and professor of psychiatry and behavioral sciences at Baylor, and a Staff Psychiatrist at MEDVAMC. "Substantially increased concentrations of 7-Cl-KYNA in VistaGen's recent preclinical studies of AV-101 with adjunctive probenecid are notable. Future clinical studies in military veterans could examine the effect of AV-101, at the 1440 mg dose combined with probenecid, in suicide risk. We look forward to further collaborations with VistaGen and the VA."

About VistaGen
VistaGen Therapeutics is a clinical-stage biopharmaceutical company developing new generation medicines for CNS diseases and disorders where current treatments are inadequate, resulting in high unmet need. VistaGen's pipeline is focused on clinical-stage CNS drug candidates with a differentiated mechanism of action, an exceptional safety profile in all clinical studies to date, and therapeutic potential in multiple large and growing CNS markets. For more information, please visit www.vistagen.com and connect with VistaGen on Twitter, LinkedIn and Facebook.

About Baylor College of Medicine
Baylor College of Medicine in Houston is recognized as a health sciences university and is known for excellence in education, research and patient care. It is the only private medical school in the greater southwest and is ranked 22nd among medical schools for research and 4th for primary care by U.S. News & World Report. Baylor is listed 20th among all U.S. medical schools for National Institutes of Health funding and No. 1 in Texas. The Baylor pediatrics program ranked 8th among all pediatric programs, reflecting the strong affiliation with Texas Children's Hospital where our faculty care for pediatric patients and our students and residents train. Nationally our physician assistant program was ranked 3rd in the health disciplines category and our nurse anesthesia program ranked 2nd. Located in the Texas Medical Center, Baylor has affiliations with seven teaching hospitals and jointly owns and operates Baylor St. Luke's Medical Center, part of CHI St. Luke's Health. Currently, Baylor has more than 3,000 trainees in medical, graduate, nurse anesthesia, physician assistant, orthotics and genetic counseling as well as residents and postdoctoral fellows. Follow Baylor College of Medicine on Facebook and Twitter.

About AV-101
AV-101 (4-Cl-KYN) belongs to a new generation of investigational medicines in neuropsychiatry and neurology known as NMDA (N-methyl-D-aspartate) receptor modulators. The NMDA receptor is a pivotal receptor in the brain and abnormal NMDA function is associated with numerous CNS diseases and disorders. AV-101 is an oral prodrug of 7-Cl-KYNA, a potent and selective full antagonist of the glycine co-agonist site of the NMDA receptor. With its exceptional safety profile in all studies to date, AV-101 has potential to be a new at-home, non-sedating treatment for multiple large market CNS indications where current treatments are inadequate to meet high unmet patient needs. VistaGen is currently focused on potential development of AV-101 for MDD, neuropathic pain, suicidal ideation and dyskinesia associated with levodopa treatment for PD. The FDA has granted Fast Track designation for development of AV-101 as both a potential adjunctive treatment for MDD and as a non-opioid treatment for neuropathic pain.

About Suicide
According to the World Health Organization (WHO), every year approximately 800,000 people worldwide take their own life and many more attempt suicide.1 Suicide is a major public health concern in the United States as rates of suicide have been increasing for both men and women and across all age groups. Suicide is the 10th leading cause of death in the U.S. and is one of just three leading causes that are on the rise.2 The Center for Disease Control and Prevention (CDC) reported that in the U.S. the age-adjusted rate of suicide increased by 24 percent between 1999 and 2014.3 The number of U.S. citizens who die by suicide is, since 2010, higher than those who die in motor vehicle accidents. People of all genders, ages, and ethnicities can be at risk for suicide and suicidal behavior is complex and there is no single cause. In fact, many different factors contribute to someone making a suicide attempt, including, but not limited to, depression, other mental health disorders or substance abuse disorder; certain other medical conditions; chronic pain; prior suicide attempt; and family history of mental disorder or substance abuse.4 Additionally, it has been found that the Veteran population is at significantly higher risk for suicide. After adjusting for differences in age, risk for suicide was 19 percent higher among male Veterans compared with U.S. civilian adult men and 2.5 times higher among female Veterans compared with U.S. civilian adult women.5 Despite these many risk factors, suicide is not inevitable for those that have one or more risk factor(s). Starting a conversation, reducing stigma, providing support and resources and working to develop safe and novel treatments for those in need can help prevent suicide and save the lives of many.

Veterans who are in crisis or having thoughts of suicide, and those who know a Veteran in crisis, should call the Veterans Crisis Line for confidential support 24 hours a day, seven days a week, 365 days a year at 800-273-8255 and press 1, chat online at VeteransCrisisLine.net/Chat or send a text message to 838255.

Additional materials can be found on VistaGen's Resources page here.

Forward-Looking Statements
This release contains various statements concerning VistaGen's future expectations, plans and prospects, including without limitation, our expectations regarding development and commercialization of our three drug candidates: (i)  PH94B for social anxiety disorder and multiple other anxiety disorders; (ii) PH10 for MDD and multiple additional depression disorders and suicidal ideation, and (iii) AV-101 for MDD, neuropathic pain, epilepsy, dyskinesia associated with levodopa therapy for Parkinson's disease and suicidal ideation. In addition, statements concerning the Company's future expectations may include statements regarding intellectual property and commercial protection of our drug candidates. Each of these statements constitute forward-looking statements for the purposes of the safe harbor provisions under the Private Securities Litigation Reform Act of 1995. These forward-looking statements are neither promises nor guarantees of future performance and are subject to a variety of risks and uncertainties, many of which are beyond our control, and may cause actual results to differ materially from those contemplated in these forward-looking statements. Those risks include the following: (i) we may encounter unexpected adverse events in patients during our clinical development of any product candidate that cause us to discontinue further development; (ii) we may not be able to successfully demonstrate the safety and efficacy of our product candidates at each stage of clinical development; (iii) success in preclinical studies or in early-stage clinical trials may not be repeated or observed future studies, and ongoing or future preclinical and clinical results may not support further development of, or be sufficient to gain regulatory approval to market PH94B, PH10 and/or AV-101; (iv) decisions or actions of regulatory agencies may negatively affect the progress of, and our ability to proceed with, further clinical studies or to obtain marketing approval for our drug candidates; (v) we may not be able to obtain or maintain adequate intellectual property protection and other forms of marketing and data exclusivity for our product candidates; (vi) we may not have access to or be able to secure substantial additional capital to support our operations, including our ongoing preclinical and clinical development activities; and (vii) we may encounter technical and other unexpected hurdles in the manufacturing and development of any of our product candidates. Certain other risks are more fully discussed in the section entitled "Risk Factors" in our most recent annual report on Form 10-K, and subsequent quarterly reports on Form 10-Q, as well as discussions of potential risks, uncertainties, and other important factors in our other filings with the Securities and Exchange Commission (SEC). Our SEC filings are available on the SEC's website at www.sec.gov. In addition, any forward-looking statements represent our views only as of the issuance of this release and should not be relied upon as representing our views as of any subsequent date. We explicitly disclaim any obligation to update any forward-looking statements. 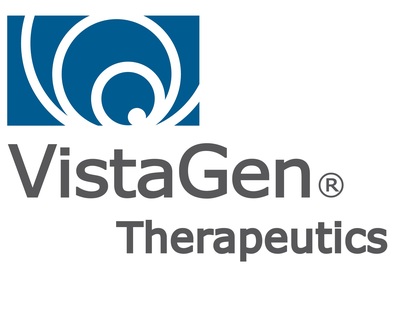