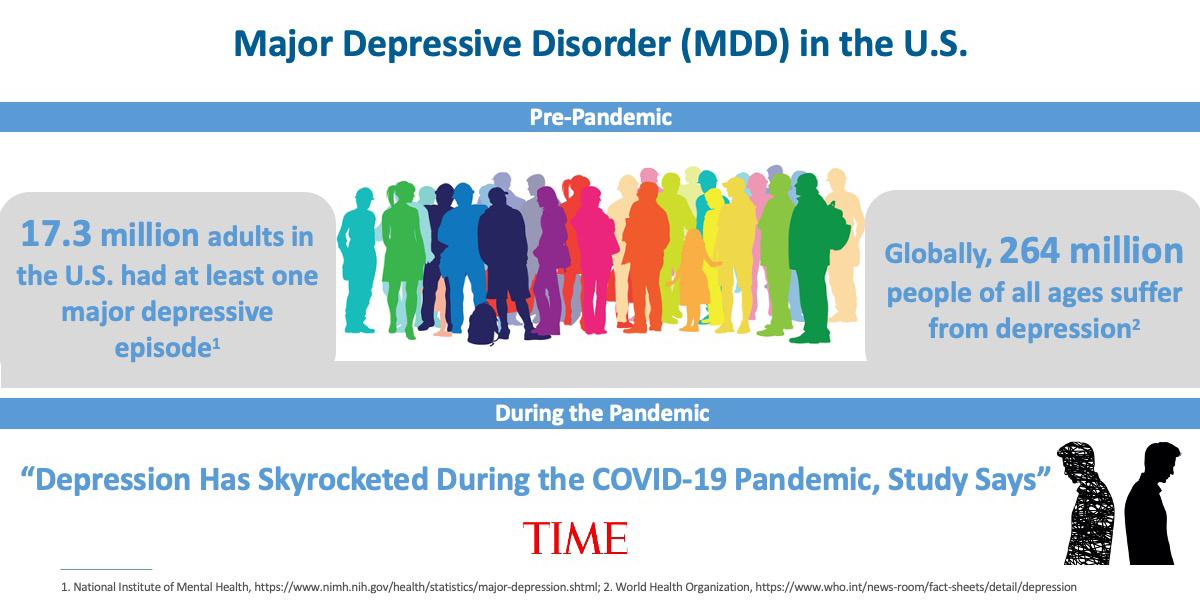 According to the World Health Organization (WHO), depression is the leading cause of disability worldwide, affecting over 300 million people, or approximately 4.4% of the global population.1 Statistics from the U.S. National Institute of Mental Health (NIMH) indicate that an estimated 17.3 million adults in the U.S., or approximately 7.1% of all adults in the U.S., had at least one major depressive episode in 2017. While most people will experience depressed mood at some point during their lifetime, MDD is different. In typical depressive episodes, the person experiences depressed mood, loss of interest and enjoyment, and reduced energy leading to diminished activity and impaired daily functioning for at least two weeks and often much longer. Symptoms of MDD also may include diminished pleasure in activities, changes in appetite that result in weight changes, insomnia or oversleeping, psychomotor agitation, loss of energy or increased fatigue, feelings of worthlessness or inappropriate guilt, difficulty thinking, concentrating or making decisions, and thoughts of death or suicide and attempts at suicide. MDD is the psychiatric diagnosis most commonly associated with suicide.2

For many people, depression cannot be controlled for any length of time without treatment. Current oral antidepressants (ADs) available in the multi-billion-dollar global depression market, including commonly-prescribed oral SSRIs and SNRIs, have modest efficacy, substantial lag of onset of action, and considerable side effects. Approximately two out of every three depression sufferers do not receive adequate therapeutic benefits from their initial treatment with a standard AD, and the likelihood of achieving remission of depressive symptoms declines with each successive AD treatment attempt. Even after multiple treatment attempts, approximately one-third of depression sufferers still fail to find an adequately effective AD. In addition, this trial and error process and the systemic effects of the various ADs involved may increase the risk of patient tolerability issues and serious side effects, including suicidal thoughts and behaviors in certain groups. New generation ADs with different mechanisms of action, faster onset activity and fewer side effects are needed.